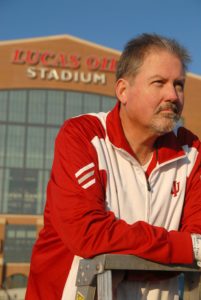 The IU Department of Bands/Wind Conducting would like to share our most heartfelt expression of gratitude and support for Professor David C. Woodley, who stepped down from his role as Indiana University Director of Athletic Bands at the conclusion of the 2019-2020 academic year.

Professor Woodley’s 27 years in the position have been marked by numerous achievements, most notably, the receipt of the 2007 Sudler Trophy—in recognition of the Marching Hundred being named the most outstanding collegiate marching band in the country—and its appearance at Super Bowl XLVI, in 2012.

His remarkable service to the organization will be recognized at an IU Homecoming by our continuing students and by representatives of the thousands of students who previously studied with him.

The IU Marching Hundred Online Store is LIVE and is open until Sunday, Jan. 10th. Purchase your IUMH apparel today! All past/current/future members…

ALUMNI HIGHLIGHT   Kimble Richardson Marching Hundred Drum Line (snare) 1981-1987 Section Leader: 1984-1986 I have a B.S. in Psychology and Master’s degree in Counseling from IU-Bloomington and I have…

Sign up for the Fan Newsletter to receive updates during football season! An email is sent mid-week before every IU home game and before any Marching Hundred performance weekend! The email includes a message from “The Colonel” – Marching Hundred Director, David Woodley – and other news about the Hundred.